Agatha Christie’s ‘4.50 from Paddington’ was first published in 1957 and is the 8th book in the Miss Marple series. 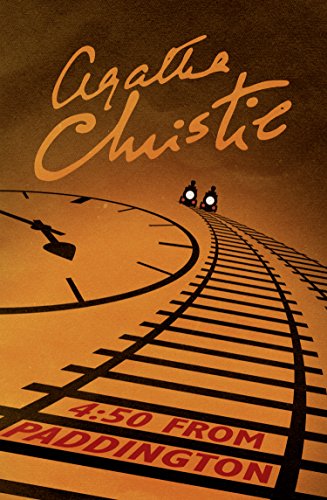 Image sourced from the 4.50 from Paddington sales page on Amazon.com under the rules of fair use. To purchase this book, click here.

Mrs McGillicuddy catches the 4.50 from Paddington station. At a certain point in her journey, Mrs McGillicuddy’s train begins to travel parallel to another train heading in the same direction. As she observes the passengers in the adjacent wagons, she sees a woman being brutally strangled. The look of terror on the woman’s face is etched into Mrs McGillicuddy’s mind’s eye as the trains break apart and head off in different directions. She must do something to help the poor woman – but what exactly can she do?

She reports the crime to the conductor and also to the guard at the next station. They are both quite skeptical, however they follow up on her report with all possible trains. To Mrs McGillicuddy’s chagrin, the woman is not found aboard any of them – dead or alive.

Enter Miss Marple. It just so happens, that Mrs McGillicuddy is on her way to see her old friend, Miss Jane Marple. She recounts what happened and Miss Marple sets to work. She retraces the steps of her friend the following day – catching the same train – she studies railway topography maps and comes to the conclusion, that the strangled woman must’ve been thrown from the train at a particular bend, whose embankment enters the property of an eccentric family – the Crackenthorpes.

Being old and frail, she cannot search for the body herself and so she enlists the help of one Lucy Eyelesbarrow – a young, intelligent and successful entrepreneur who she has encountered in the past. Together they begin to unravel the mysteries surrounding the location of the body, the identity of the murdered woman and the motive behind her strangulation.

I really liked the premise of this mystery – the fact that before anything else could be explored, it had to be established that a crime had actually been committed added an extra layer to the mystery. Nobody was willing to believe an old lady, who was an avid reader of crime magazines, had actually witnessed a murder. Everyone had brushed it off as an overzealous argument between a husband and wife, or even just Mrs McGillicuddy’s imagination. Everyone but Miss Marple.

Her tenacity is what makes her character shine. Even as she ages and appears to be more frail and doddery – she continues to prove everyone wrong and this story is no exception.

‘4.50 from Paddington’ is filled with characters who are either members of the Crackenthorpe family, or who are closely connected to them. They each have their own rich story line and interesting history. Throughout the book there are a number of red-herrings and as always, Agatha Christie succeeds in casting suspicion over each and every character available to us as suspects.

Towards the end, when nobody had a clue as to the identity of the murderer and Miss Marple began her treatise on greed and family inheritance, I was certain that I had picked up on who the killer was. I had the motive, the means and everything else covered and I was just about to pat myself on the back for having picked the killer – when Agatha threw a spanner in my works and it was someone I had not once suspected.

Some readers might think that their are one too many red-herrings in this book – but I am of the opinion that if it gives the characters more layers and it actually adds to the depth of the story, then it is certainly worthwhile. And 4.50 from Paddington, certainly tells an interesting tale.

To read a wonderful review of my book, ‘Underneath the Killing Tree’, click here.